Select a week of pregnancy from a trimester 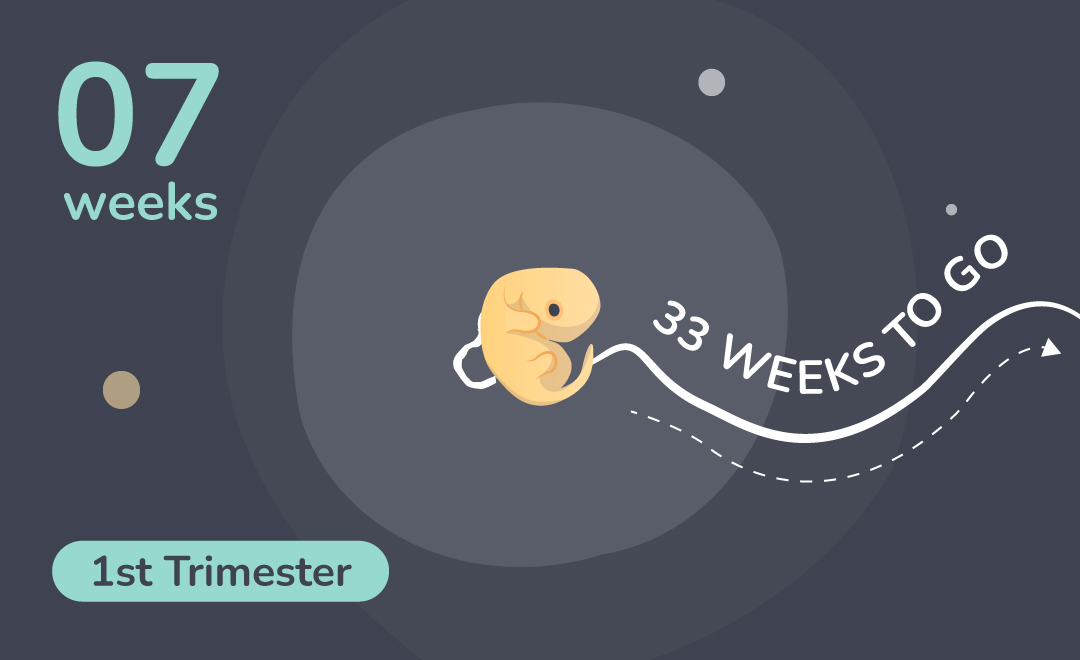 Your baby is the size of a chickpea! 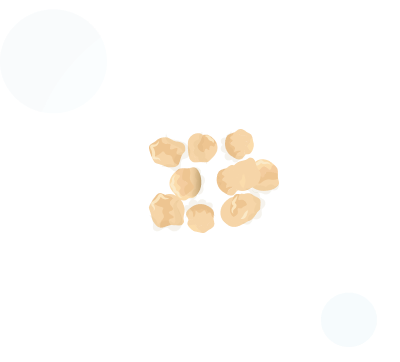 How far along now?

Which trimester is this?

How many more weeks to go?

A popular phrase says that ‘a pregnancy that lasts 9 weeks lasts 9 months’. This means that a risk of early miscarriage almost drops to nil by then. Early miscarriage is nature’s way of eliminating foetuses that aren’t viable. So, there is NOTHING that a mum did wrong to bring it on. In this week, the embryo has grown to about 10mm long from head to bottom. This measurement is called the crown-rump length. The brain is growing rapidly and this results in the head growing faster than the rest of the body. The embryo has a large forehead, and the eyes and ears continue to develop.

Ayurveda says that the aatma possessing all the qualities stirs itself nicely with the five elements called  panchamahabhuta and attains the shape called shleshma (mucoid form) in which all the body parts. It is very much present. though not manifested.

The embryo has an oddly large forehead right now. ,The brain is growing at a superfast speed! Did you know that at this stage, the brain grows faster than the rest of the body? The inner ears start to develop, but the outer ears on the sides of the head will not appear for a couple more weeks. Nerve cells continue to multiply and develop as the brain and spinal cord (the nervous system) starts to take shape. The limb buds start to form cartilage, which will develop into the bones of the legs and arms. The arm buds get longer and the ends flatten out – these will become the hands.

The eye, even though really tiny, is getting its components ready. The main parts of the eye that allow your baby to see – the cornea, iris, pupil, lens, and retina – start developing this week, and they're almost fully formed just a few weeks later.

Liver and pancreas, that are vital organs, are already taking shape. The stomach and esophagus also start to form. The esophagus is the tube that moves food from your baby's mouth to the stomach.

Your baby's brain gains 250,000 cells per minute, on average, throughout the course of pregnancy. Whoa! The neural tube that becomes your baby's spinal column and brain has formed and closed on both ends, with your baby's brain at the top. It's now made up of three areas (forebrain, midbrain, and hindbrain).

A delicate network of nerves is spreading through your baby’s body. They are going to start making constant little motions, as their brain and spinal cord sends signals to the muscles in their body. Soon your baby will be able to feel sensations, like temperature and taste. Cartilage starts to form in the arm and leg buds. The arms grow longer and flatten out at the ends as a sign of hands to appear there, later.

Some women don’t feel symptoms till Week 8. It’s a mystery why some get those early, some late, some have intense symptoms, some mild. Relax, it doesn’t mean that there's something wrong with your pregnancy.

Some foods that you liked so far could now become intolerable! Food aversions are another side effect of rapidly increasing estrogen levels. Hang in there, this is likely to go away by the second trimester.

Some women find certain smells like new upholstery, or frying of food completely unbearable. This may be a side effect of rapidly increasing levels of estrogen in your system. Even the perfume you loved so far can become intolerable. This is likely fade away in the second trimester.

Starting now and perhaps going up to week 12, you may experience a range of strong emotions. They are caused by a mix of reasons: inadequate sleep, stress, fatigue, and hormonal changes. There are also, sometimes subconscious concerns about being a parent.

This can be very annoying, especially when you are trying to get sleep. It could be because you may be producing more of it or swallowing less – or a combination of the two. Hormonal changes, nausea, and heartburn can all cause you to salivate more during pregnancy. Have lots of water, suck on candy and eat small meals more often.

Some women experience a struggle in passing bowels. It happens because pregnancy hormones relax smooth muscles in the body, which means food moves through your system more slowly. Try to eat foods with high-fibre content and if really not able to cope, do ask your doctor if your prenatal vitamin could be causing it.

Acid reflux, (also known as heartburn or acid reflux) is that burning sensation between the lower throat and the bottom of the breastbone. It can be really distressing but there’s not much you can do about it. Have cooling foods and drinks, don’t eat too much at one go and lie with your head and chest propped up.

How to avoid spotting during early pregnancy

Make a note on the type of bleeding – whether there are clots, the colour – red or brown, associated symptoms such as vomiting, lower abdominal cramps etc.

Apply a preparation called Shata Dhauta ghrita around your navel  everyday. It is a light cream that deeply penetrates into all seven layers of skin to heal it from within.

Seek medical advice and rule out the cause of bleeding at earliest.

For more such solid tips, download the iMumz App.

Some women decide to choose a doctor around this week. For most, it's the morning sickness that is driving them mad!

Seventy to eighty percent of all pregnant women experience some form of morning sickness, which is caused by the increased amount of hormones in your body. If morning sickness is so severe that you are constantly throwing up and not keeping anything down, consult your doctor about the possibility of having hyperemesis gravidarum.

At this stage, the doctor might do a transvaginal ultrasound, check your urine for the hCG levels that are needed to maintain pregnancy and start you on a prenatal vitamin.

For a happy and healthy pregnancy, download the iMumz App.

Adding fiber-rich bananas help your tummy in a nice way. Another study shows that vitamin B6 may help relieve nausea and vomiting in early pregnancy as well.

How to Make Raw Banana Kebab

For more such tips and meal plans, download the iMumz App.

To know more
GET THE APP

What can cause bleeding at Week 7 of pregnancy?

There are several causes of bleeding during early pregnancy, some are of no cause for worry while some can indicate miscarriage.

The first is ‘implantation bleeding. It's not unusual to see some spotting at six weeks, but it should be light, not even enough to cover a small pantyliner. This light bleeding is normal but if you see a lot of blood, if the spotting lasts longer than two days, or you have any concerns, be sure to see your doctor right away.

Another one is a ‘brown discharge’. This may look like the sediment in a coffee mug.. This “discharge” is actually old blood that has been in the uterus for a while and is just coming out slowly.

Bleeding during a miscarriage can also look like coffee sediment. But the confusing thing is that it can even be pink to bright red. It can alternate between light and heavy or even stop temporarily before starting up again. If you miscarry before you're eight weeks pregnant, it might look the same as a heavy period.

The most common sign of miscarriage is vaginal bleeding.

Can I feel anything during week 7 of pregnancy?

You might experience your belly hardening occasionally. At  7 or 8 weeks, the growth of the uterus and the factors working towards growing the baby give this sensation.

Most women may not feel very different, because there are little if any visible physical body changes. You may, however, begin to experience physical symptoms such as nausea and vomiting, sometimes called “morning sickness“ weight gain or loss.

It’s still too early to feel any movement. First-time moms may not feel the baby move until closer to 25 weeks. Seasoned moms may feel movement as early as 13 weeks.

Morning sickness means my baby is probably not getting enough nutrition.

The baby is fine even if you are nauseous and eating very little. Morning sickness can only become a problem for your baby if you can’t keep down any foods or fluids. It also may pose a problem if you begin to lose a lot of weight. You should call your doctor if you:

Bonding with your baby

As your tiny baby is growing remember it is constantly getting messages from you. It's not just hearing your heartbeat and whatever music you might be listening to, it also gets chemical signals through the placenta.

Psychological Science says that this includes signals that are constantly being generated by your mental state. If you are depressed, mind you, those signals are reaching the baby and affecting it.

You have to take your emotional fatigue into account. Meditation is a great way to calm and relax, and release good hormones for the baby.

For meditation exercises to heal the emotional wounds and give you a happier pregnancy, download the iMumz App. 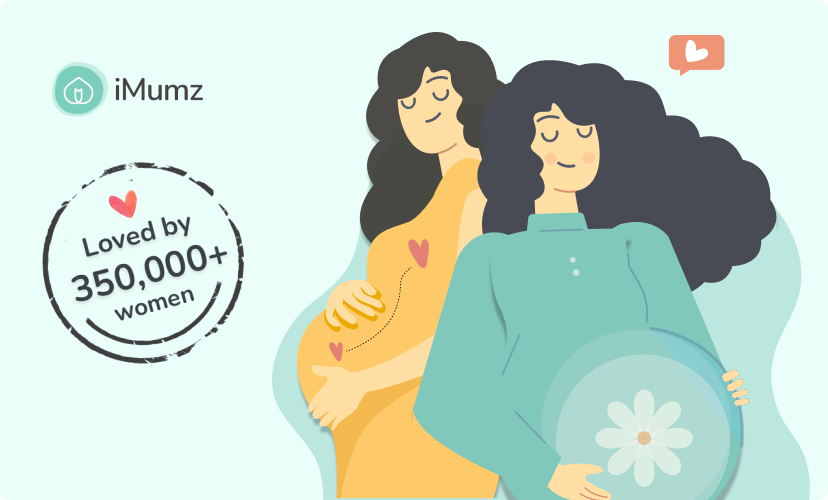 The award-winning iMumz App is helping 350,000 + women make their pregnancies healthier and happier.

From the iMumz Happy Reading Room

The rich text element allows you to create and format headings, paragraphs, blockquotes, images, and video all in one place instead of having to add and format them individually. Just double-click and easily create content.

How to customize formatting for each rich text

Headings, paragraphs, blockquotes, figures, images, and figure captions can all be styled after a class is added to the rich text element using the "When inside of" nested selector system.