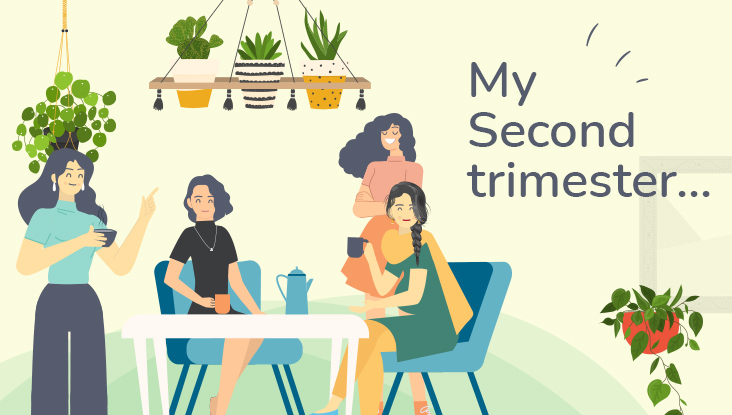 The Second Trimester of Pregnancy

The girls have been waiting for Malini to educate them about the second trimester of pregnancy. But, Malini has been busy managing Sanju’s colic and is quite exhausted. Well, colic can be a confusing event, isn’t it? She has been feeling like a rat in a maze, hitting her head against dead-ends.

One fine day, the colic disappeared. Just like her maid who also disappeared. 'Maidam, I am going to aaspital', she'd called to say, which was, in all probability, not true. Because, the number of times she had said that she was going to the hospital added to the duration needd for earning a full paramedic certification!!

'She's off again', Malini threw her hands in the air with frustration.

Malini put Sanju in a pram and went to the garden for a stroll. The fresh air and scent of flowers made her as happy as the sales signs of 70% Discount on All Shoes made her.

Her friends were sitting on around the outdoor table, sharing their day’s achievements and complaints when they spotted her,

‘Hey, stranger,where have you been? You were supposed to tell us all about the second trimester of pregnancy.’

‘These two weeks have not been easy with Sanju.’

They let out a collective ‘awww’ of sympathy and fussed over the baby. Malini decided to resume her lessons on stages of pregnancy.

‘Well, the good news is that your fatigue and tiredness lessen considerably. My own nausea disappeared like magic! But there are FIVE FOES you end up with in the second trimester!’

‘What foes?’Ritu wondered if Malini had picked up a fight at the hospital during her check-up.

‘Foe 1: Legs: Leg cramps are common in this phase and they mostly appear at night. To prevent them, do some calf-stretching before getting into bed, avoid a sedentary lifestyle, and drink lots of fluids. You might want to replace your fancy sandals with more practical footwear that is not only comfortable but also offers support to the legs. If the dreaded cramp strikes, try to stretch the calfmuscle on the affected side. Take a hot shower, or immerse yourself in abathtub. For me, ice packs helped.

Foe 2: Urinary tract: Some women might get a bout of UTI. If you get a urinary tract infection, you might feel strong urge to urinate that can't be delayed, sharp pain when you urinate, urine that is cloudy or has a strong smell or you have a fever or backache. Just keep watching your body for these signs and see a doctor.

Foe 3: Nose: When hormone levels increase and your body makes more blood, the nasal tract can also act up. The mucous membranes can swell and bleed causing stuffiness and nosebleeds. Saline drops or a saline rinse can help relieve this congestion. Of course, keep your fluid-intake high and do consider a humidifier if your room is dry. I found it useful to apply some petroleum jelly at the edge of my nostrils.

Foe 4: Teeth: Some women report sensitivity while flossing and brushing, resulting in minor bleeding. You could replace your toothbrush with a softer one and also consider rinsing your mouth with saltwater. Frequent vomiting often weakens the tooth enamel and make you more prone to cavities. So, make sure your dentist remains a good friend!

Foe 5: Skin: The hormones are raging and often, they cause an increase in pigment-bearing cells (melanin) in your skin. You might notice brown patches on your face (melasma). You might also see a dark line down your abdomen (linea nigra). Don’t worry, they will fade away after birth. To keep them for darkening, use sunscreen when outdoors. You might also notice red or silverish lines along your abdomen, breasts, buttocks or thighs: these are stretch marks. They fade over time. Some women are worried about them but I am proud of these ‘badges’ I have earned!’

The girls were happy with these inputs: who knew that different parts of the bodies are affected by pregnancy? It was quite an eye-opener!