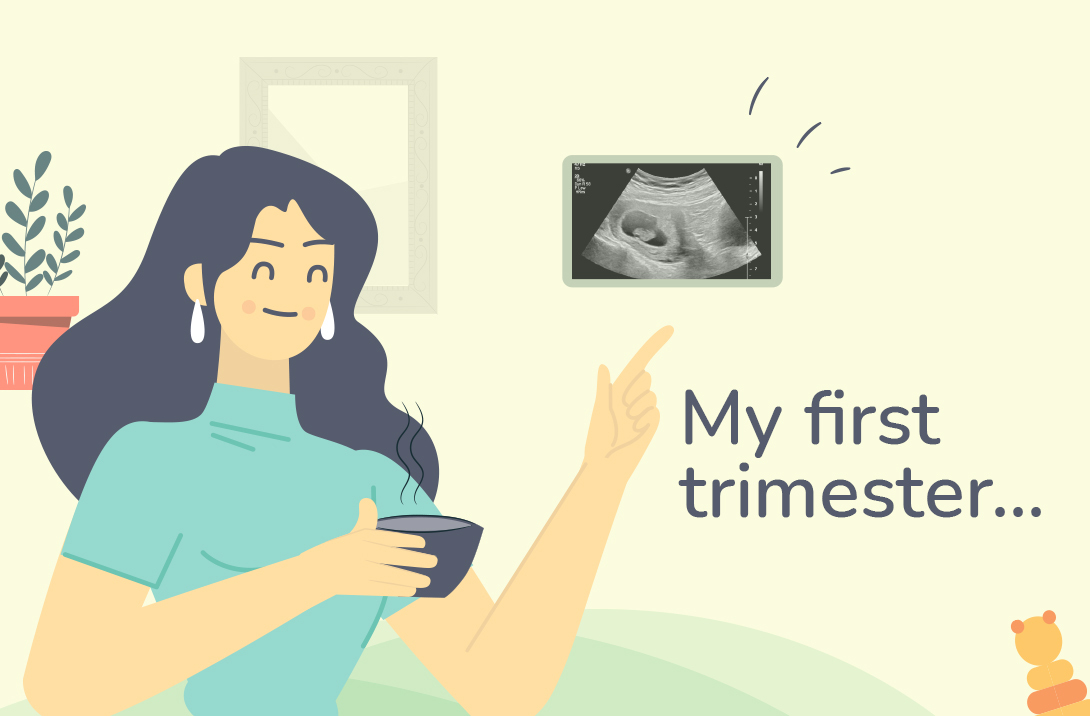 The First Trimester of Pregnancy

Malini and Rohan were like two butterflies fluttering over the baby all the time! They were so besotted with her: their eyes were stuck on her, just like their building’s watchman, Shyamu's eyes remained stuck to his phone-screen most of the time.

Malini felt that the stages of pregnancy had just flown by and she was determined not to miss any part of the baby’s development! Baby Sanju was 1 month old today: Malini and Rohan had called a few friends over to celebrate over a tea and snacks.

The neighbourhood girls got a cake and a Bazoo Eco Playkit for Sanju and as they had a small party.

'This Playkit is for when you grow up a little,' they coo-ed to her.

Malini was quite the guru as she sat on the sofa and shared pregnancy gyan. The girls were pretty impressed how she had researched so much post Sanju’s birth.

‘Hey, tell us about your pregnancy!’ one of them asked.

‘Yes, inspire us to take the plunge!’ another giggled.

Malini was loving the adulation, something she never got from Clueless Chandan, her boss who thought praising employees was a sign of temporary or permanent insanity.

‘I will tell you about the stages of pregnancy, today, okay?’

There was a round of applause.

‘So, the three stages are called the three trimesters.’

The first trimester begins on the first day of your last period. Got it?! So, make sure you remember the dates.

It lasts till the end of week 12. You realize what this means: that by the time you are finally sure, you might already be five or six weeks pregnant!’

Ritu piped in, ‘Like by the time I realize the rice is cooked, it it already burnt from below!’

The girls laughed. Their guru shushed them and continued,

‘These first three months are of rapid growth. The fertilised egg rapidly divides into layers ofcells and implants in the wall of the uterus where it carries on growing. These layers of cells become an ‘embryo’.

So, during this trimester, your baby grows faster than at any other time. By six weeks, a heartbeat can usually be heard and by the end of week 12, your baby's bones,muscles and all the organs of the body have formed. At this point, your baby looks like a tiny human being and is now called a foetus. This little one is already practising swallowing!’

‘Wow, that’s amazing!I thought it would be just an unidentifiable set of cells at this stage’, Hina exclaimed.

‘Our bodies also go through many changes at this time. Almost every organ system in your body, not just the uterus, is affected by sweeping hormonal changes. This may lead to effects like,

·        Extreme tiredness, like when I almost slept off during a meeting,

·        Upset stomach with or without throwing up (morning sickness). Well, technically, it can happen anytime: I had it towards early evenings,

·        Cravings or distaste for certain foods. Gosh, how much I wanted to eat biryani!

·        Headache, so please ask the doctor if and what medication you can take,

·        Weightgain or loss: Yes, don't get alarmed if you drop a few pounds because of the vomitting. Baby is JUST fine!

So, watch your body and make changes to your daily routine, such as sleeping early or eating frequent, small meals.'

‘Wow, Malini, that helps! What happens in the second trimester?’

‘For that, you will have to call me for tea to your place. That’s when I shall disburse more gyan’, she announced leaving them wanting more!